Artisan Canvas
Your reply has been posted successfully!

Oil has been the lead story recently—for a few reasons. In January, Saudi Arabia and Russia kicked off a heated competition for market share—after several years of cooperating and coordinating output in order to attempt to control oil prices. The result has been a well-documented collapse in oil prices—and growing challenges for oil producers and investors alike. Though it seems the near-term race to the bottom may have concluded, it also seems unlikely prices rocket back in the near term. Here are six interesting charts showcasing some of the recent phenomena.

Exhibit 1 shows the long-term price history of both WTI (the US oil benchmark) and Brent (the global oil benchmark) crude oil prices—putting the recent fall into historical context. It’s worth narrowing the focus to more recent days, though, when Brent and WTI have begun to noticeably diverge from their normally rather narrow trading range (Exhibit 2).

Why the divergence? Obviously, a big consideration is the fact that demand has fallen through the floor. According its April Short-Term Energy Outlook the US Energy Information Administration (EIA) is projecting global petroleum and liquid fuels demand will “decrease by 5.2 million b/d in 2020 from an average of 100.7 million b/d last year before increasing by 6.4 million b/d in 2021.” So what to do with all the oil still being pumped from wells globally? Therein lies a second influence on the divergence between WTI and Brent: storage.

Exhibit 3 shows weekly US stocks of crude oil and petroleum products excluding the Strategic Petroleum Preserve (more on which to follow)—noteworthy is the dramatic jump in the April data. .

The reason this contributes to the divergence between WTI and Brent crude prices is WTI is typically priced in Cushing, OK—a landlocked location, making land-based storage the most convenient (but also, increasingly expensive and rare) solution. In contrast, Brent crude is priced effectively on a North Sea shore—making seaborne storage an option and increasing Brent producers’ flexibility to continue storing oil in the hope that markets will equalize sooner than later (though costs for tanker storage solutions are also rising quickly. And it’s a big hope. Because the main alternative—shutting in wells—isn’t particularly attractive from producers’ standpoint given the process can damage the oil reservoirs and make it challenging to revive production in the future.

Though it seems the US still has some onshore space left (for some 130mn barrels) at some point, it’s reasonable to expect storage options to be exhausted—particularly considering US production had been at all-time highs prior to the pandemic, as shown in Exhibit 4. (It’s worth noting the data in Exhibit 4 only run through January. EIA data for February and March seem almost certain to show relatively sharp downturns in both lines.) 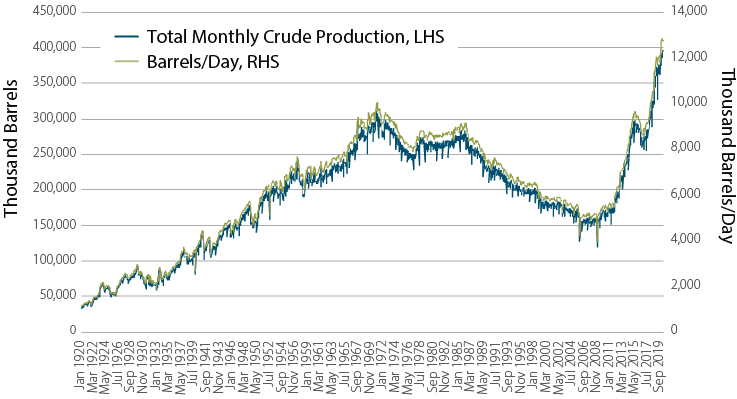 These storage considerations have had some interesting side-effects—including President Trump’s negotiating leasing storage space at the US’s Strategic Petroleum Reserve (SPR) to several oil and gas companies. He’s also considering government purchases of some of the oil for the reserve itself. The SPR was started in the 1970s against the backdrop of the Arab oil embargo, which contributed to supply shocks and attendant price spikes during the decade (Exhibit 1).

Another interesting phenomenon has been recent price action on USO. USO is effectively an ETF whose objective is having the daily percentage change in its net asset value reflect the change in the price of WTI crude delivered to Cushing, OK, as measured by the percentage change in the WTI crude oil futures contract traded on the New York Mercantile Exchange (NYMEX). In other words, it roughly tracks the price of the futures contract—a feature which has resulted in some odd price action over the years. Exhibit 5 shows weekly fund flows into USO since April 2006, plotted against the WTI spot price (futures prices have cratered recently even more dramatically given—partly—the aforementioned storage issues). Despite oil prices’ year to date fall, flows into USO have hit all-time highs (it launched in April 2006), prompting speculation about whether retail investors are effectively calling a bottom on oil prices, or whether something more nuanced is going on. 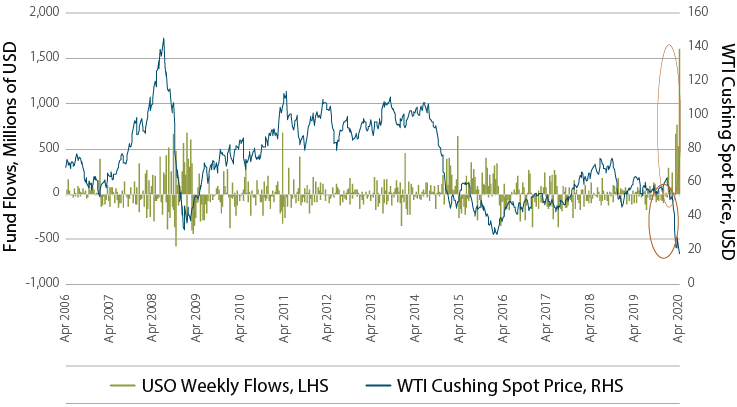 Provided oil producers find a way to get through this period without shutting in massive numbers of wells, seems as though the world should be fairly well-positioned coming out of this extended economic shutdown to resume production—and in a pretty highly efficient way.

Exhibit 6: Global and US Rig Counts Vs. US Production 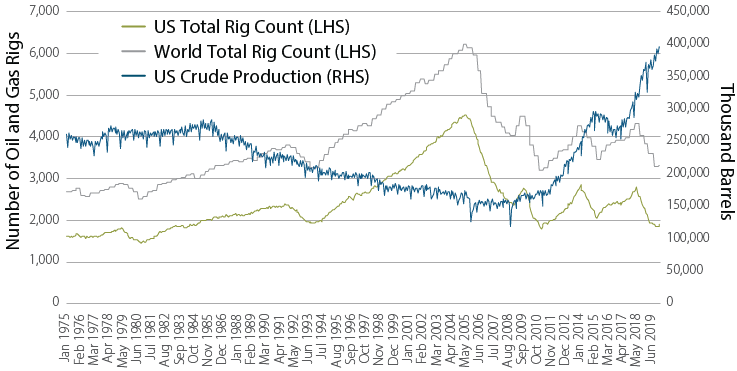 Have a question or comment? We welcome your feedback. Comments will not be made public, but will be read by a member of our editorial staff.

Enjoying the read? Subscribe to get a periodic digest of Artisan Canvas delivered straight to your inbox.

Thank you. You have been subscribed.