Artisan Canvas
Your reply has been posted successfully!

The Importance of Profit Growth in Equity Returns

There is frequent debate among market participants about which style factors will be in favor in the future: growth, value, momentum, active, passive, etc. While we do not possess the ability to pinpoint the timing of when one style may be in favor over another, we believe the key element in determining the future path of a share price over the duration of an economic cycle is highly dependent on knowing which way profits are headed. To achieve this, we conduct rigorous, bottom-up fundamental analysis for each prospective and existing holding within our portfolios. Herein, we provide a deeper dive into the empirical evidence supporting our core belief: stocks follow profits.

Equity share prices and forward profit expectations are nearly perfectly correlated. Examining Russell 1000 Index returns dating back to 1997, the paths of prices and EPS have an approximately 0.90 correlation. The relationship is slightly stronger for value stocks, with 0.92 correlation.

Sources: FactSet, Artisan Partners. Past performance is not indicative of future results.

The roaring economic growth of the 1990s came to a halt in the early 2000s amid the burst of the dot-com bubble and 9/11. The economic expansion that followed was marked by rapid globalization, financial deregulation, tax cuts and below-average interest rates. GDP growth was just shy of 3%, and inflation ran just above 2%. More cyclical sectors —energy, materials, producer durables—realized higher rates of return, and value stocks fared better than growth.

Sources: FactSet, Artisan Partners. Past performance is not indicative of future results.

Despite different environments, the largest driver of equity returns across the two previous economic expansions was profit growth. Examining Russell 1000 Growth and Russell 1000 Value Index returns from 2002 to 2007, multiple contraction undoubtedly played a meaningful role as the market was coming out of the dot-com bubble: -56% and -42% of the total return for growth and value, respectively. However, profit growth accounted for the majority of total return over this period: 76% and 93% for growth and value, respectively.

During the most recent economic cycle—July 2009 to February 2020—profit growth was again the largest contributor to total returns. We acknowledge superior multiple expansion in growth stocks also played a role in the style’s higher total return but believe this dynamic is attributable to the characteristics of growth stocks relative to value more so than systematic factors (i.e., historically low interest rates). Growth stocks exhibited higher levels of recurring revenue/visibility, higher returns on equity, lower cyclicality, lower beta, higher margins and stronger free cash flow, and we believe the market appropriately rewarded them for these qualities over this timeframe.

Sources: FactSet, Artisan Partners. Economic expansions are defined as the periods between the end date and start date of recessions. The two expansions occurred between 12/3/2001 to 12/31/2007 and 7/1/2009 to 2/29/2020 per FactSet. EPS growth is based on FY1 EPS during each respective period.

Source: Cornerstone Macro. Past performance is not indicative of future results. Data as of 7/20/2020. 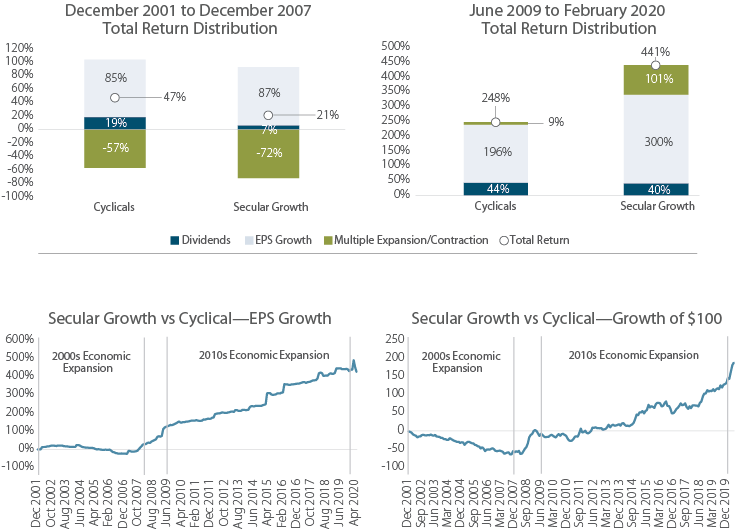 Sources: FactSet, Artisan Partners. Past performance is not indicative of future results. Sector data is based on Russell defined sectors. Cyclical sectors include financial Services, materials and processing and energy. Secular growth sectors include technology, consumer discretionary and healthcare.

Shorter-term market rotations can be tricky to predict, but we think a rally among cyclically depressed sectors is possible if there is a broad-based economic expansion—with rising inflation and interest rates—and progress toward developing a COVID-19 vaccine. We believe these are the necessary ingredients to sustain a strong value-over-growth rally—especially given value stocks (generally) have experienced increasingly higher betas relative to growth over the past decade. We think this may be too much to ask of the global economy, given extended fiscal deficits, US election uncertainty, mounting social discord and the damage done so far to personal and corporate balance sheets. Poor corporate balance sheets ultimately heighten risk and depress multiples, and we have seen rising leverage in value vs growth in recent years.

In today’s economy, we believe the market has been right to penalize more capital-intensive cyclical businesses with higher debt levels and reward high quality businesses with high levels of recurring revenue/visibility, lower cyclicality, lower beta, high margins, strong free cash flow and robust balance sheets. We believe over longer time-horizons, these businesses will compound profits at rates high enough to support attractive equity returns . While we wouldn’t expect further multiple expansion at this juncture, we also don’t view it as unjustified. As such, we believe high quality businesses whose long-term growth is not overly dependent on macroeconomic tailwinds and that are trading at valuations we can understand will continue to do well.

Have a question or comment? We welcome your feedback. Comments will not be made public, but will be read by a member of our editorial staff.

Enjoying the read? Subscribe to get a bi-weekly digest of Artisan Canvas delivered straight to your inbox.

Enjoying the read? Subscribe to get a bi-weekly digest of Artisan Canvas delivered straight to your inbox.